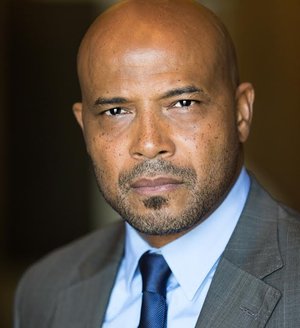 Veteran actor Lester  was introduced to the world of theater during his senior year in high school, which lead to 17 lead roles while attending Mars Hill University.  Lester started acting professionally with summer stock but, it was what seemed an ambitious move to Minnesota for an actor of his “type” with only $13 in his pocket, that proved to be the key to launching a long and thriving career filled with extraordinary acting opportunities.

The long time company member, credits Penumbra founder Lou Bellamy and his performance in Fool for Love during his first year in the Twin Cities, that inspired him and it was attending August Wilson’s play Ma Rainey’s Black Bottom at Penumbra that fueled his determination to become a Penumbra company member where he has performed in Two Trains Running, King Hedley II, Jitney, The Piano Lesson and Fences as Cory Maxson, Lou portrayed Troy Maxson

Since 1991 Lester has played dozens of roles on Penumbra’s stage, many of which were characters in August Wilson plays. Lester has also performed lead roles at The Illusion Theatre, Minnesota Opera, Chanhassen Dinner Theatre, Mixed Blood, The Children’s Theatre Company, The Guthrie Theatre’s national tour of Othello, as Othello.

Lester currently resides in Los Angeles, California with his wife and has starred in several independent films, shorts, commercials and he works as a voice over actor, as well.